RUSH: The Drive-Bys, they're incorrigible. Now they are literally trying to once again talk the people of this country into a recession. Now they're doing it with the inverted yield curve. And the whole problem here is the Federal Reserve. The Federal Reserve is anti-Trump, is making a mess of the interest rate circumstance.

So many people in that town want rid of Trump that they're going to stop at nothing. It doesn't matter what damage they do to the economy or the country. And it's not unprecedented, folks. This has been done before. What was it, back in 2006, the midterms, the Drive-Bys were doing everything they could to talk down the economy. We had the so-called financial crisis of 2008. And, of course, they were doing everything they could in the second Bush term to talk down the economy while sabotaging the Iraq war and war on terror efforts.

It's never ending, and of course now you've got the headlines we're just right around the corner because of this yield curve, the inversion in the yield curve. This has to do with bond prices and yields. And it's all a function of the Federal Reserve setting interest rates and the Federal Reserve acting like they're the central bank for poverty-stricken nations around the world instead of the central bank of the United States.

So we'll get to this in greater detail.

RUSH: Speaking of the economy, I wouldn't blame you if you thought the economy was about to tank. You turn to The Drudge Report right now: "Yields flash recession warning, stocks dive, banks hammered." 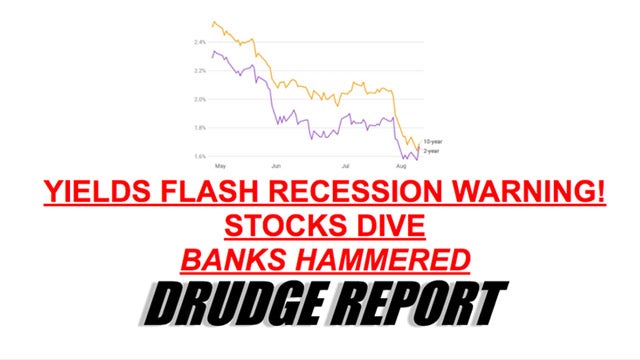 This is the bond market. The bond market's in trouble. And this is where the yield curve is trending so far down that it makes no sense to buy bonds, no reason to invest in them. You've got people in various other news stories worried about negative interest rates, which means you deposit a thousand dollars in a savings account and that thousand dollars immediately becomes $950 because you have to pay an interest rate for the bank to keep your money. They're promising you this is happening. Then they're promising that a recession will follow all this.

And no matter where you look, this is the mainstream media reporting and yet I have this headline "Americans apply for jobs at Koch Foods." The unemployment situation is great. We have more people looking for jobs than there are jobs open. From the National Federation of Independent Businesses: “Small Business Optimism Continues to Defy Expectations.” I'm going to give you a pull quote from this story.

"While many are talking about a slowing economy and possible signs of a recession, the 3rd largest economy in the world continues to defy expectations, generating output, creating value, and expanding the economy,” said Juanita D. Duggan, the president and CEO of the National Federation of Independent Businesses.

Another pull quote, " Contrary to the narrative about impending economic doom, the small business sector remains exceptional.” And of course that's where the bulk of employment in America is. "This month’s index is a confirmation that small business owners remain very optimistic about the economy but are being hamstrung by not finding the workers they need,” said NFIB Chief Economist William Dunkelberg.

So here you have Juanita Duggan and William Dunkelberg saying small business confidence is through the roof. The only thing holding them back is they can't find enough people to do jobs that are open. Okay. That's the real world. This is American small business. This is where people are working and getting paid. This is where commerce is taking place. This is the definition of economic activity.

But then over here in all these esoteric places we have the yield curve is heading in the wrong way and the Feds are doing the wrong thing on interest rates and the bond market over here and the hedge funds there. And there's this giant disconnect. Democrat Party candidates are running around talking about how awful this economy is. But they better be careful because not long ago they were trying to credit it as Obama's economy. Right? Am I right?

I am. It wasn't that long that every one of these people, including in the Drive-By Media, got so sick and tired of having to hear what great things Trump had done for the economy that they had to jump in and say, “Well, it's really Obama's.” Yeah, now they're talking about the Obama economy into a recession.

Folks, there's a good old standby here, and I know people have smirked at it when I’ve said it in the past: If they're going to have a recession, just don't participate. This recession they are trying to create is attitudinal first. They have succeeded. I remember -- you probably will remember this story as well -- during the Bush presidency, I forget, must have been the second term, the economy's going great, the economy's doing well in Bush's second term but the media is talking about it like it's something nobody's experiencing.

“It's really bad. The bottom's about to fall out. The recession is happening. We're on the verge.” The Democrats always, when there's a Republican in the White House, we're always on the verge of recession. I got a call from a guy, average ordinary guy, he said he was worried. I said, “What are you worried about?”

He said, “I'm doing really well. I mean, my economic life is good. But, man, I turn on the news and I'm hearing how everybody else in my town is about to fall off the edge.”

I said, “This is exactly the point.” There are two things at work here. You're doing great because the economy's doing great. You're doing okay. The savings rate is even up. But then you turn on the news and you hear all the suffering, you hear about how it's all about to go off the cliff. You hear about we're on the verge of another recession, it could be the end of the country's economy for a long time. It could be a repeat of 2008.

But you're sitting there, you're doing okay. So your reaction is, A, guilt. Oh my God, this is not fair, if I'm doing well -- so you're not permitted to enjoy your own reality because you're pummeled every day with fake news about how the economy bottom is about to drop out. Don't participate, folks. If they want to throw a recession in the news, then let them have their recession in the news, but just don't participate.

RUSH: Oh, lookie here, folks. I found another economic story. This story in the Wall Street Journal. The headline is: "Chinese Economy Weakens on Several Fronts as Trade War Rages." Now, you may have heard that Donald Trump just "blinked" in the trade war with the ChiComs. Yeah, they didn't report that the ChiComs "blinked" last week when they tried to play the currency-manipulation game and lost. The ChiComs blinked in less than 24 hours and stopped playing the devaluation game. But now Trump has blinked. These people are obsessed. 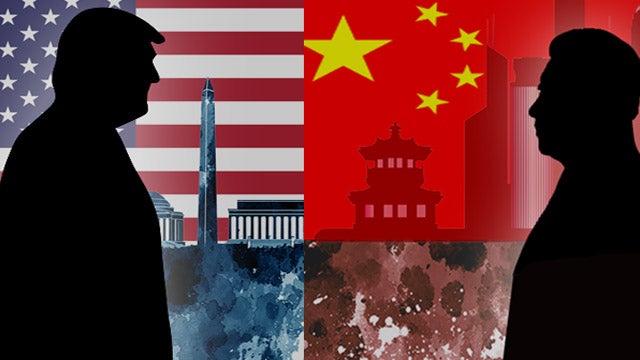 "American farmers are going bankrupt; Trump doesn't care!" So Trump comes along and delays the imposition of September tariffs until December, and the media says, "Trump blinks!" Now if they were consistent, they would be happy. They'd be happy, because all this economic damage they think is being done by tariffs will stop. It's tough to keep up with these people. But all they can do is just attack Trump no matter what. All tariffs have not been delayed!

They're not going to be subject to tariffs. You're not going to have any price increases on your iPhones. Trump and Tim Cook, they know each other; they talk. This is something that has to be done in this trade imbalance with the ChiComs. It has to be done. Trump is not blinking. He's attempting to accomplish a number of different things at the same time, including maintain U.S. economic activity. But the headline here from the Journal tells the tale: "Chinese Economy Weakens on Several Fronts as Trade War Rages."

You would never... Outside the Journal, you'll not get anybody in mainstream economics that even understands the impact on China of this trade war. Because in their world, "China is making a fool out of Donald Trump," because that's what they want the case to be. Trump's trade war is doing great damage to the Chinese economy. The ChiComs just don't react the way presidents in this country do, because the ChiComs don't care about their people as much as people are cared about in capitalist countries.

By definition! By definition, people that live in communist countries... (big sigh) They're just statistics. They're just bodies to be shuffled around and moved around if they think the right thing -- and if they don't think the right thing, you send them off to re-education camp. The ChiComs have a billion people. If there were an old-fashioned ground war that broke out, the ChiComs wouldn't care. They wouldn't mind losing some number of people. They've got more than they can feed anyway. Every country looks at things differently.

But when you have a media that hates Trump, every country is better than America because they hate Trump. That's why we got all of this romanticization of communist countries and socialist countries. Anything, anything to rip into and to destroy Trump. Dirty little secret, though. Here's a story from PJ Media: "Socialism Label Still a Drag at the Ballot Box." The media's not going to tell you this either, but the primary reason that Democrat candidates are running is why they're going to lose.

This is a... You know, I like to look at things positively. We have -- epecially with this Fredo Cuomo quote here, when he went down to Cuba. This is a golden opportunity we have. We have all these skulls full of mush out there, all these Millennials, college-educated Millennials who think (sniveling), "Socialism is some romantic thing. Everybody is the same and everybody is equal, and nobody's feelings are hurt.

"And you can't say mean things about anybody, and there's climate change concerns," and so forth. They have totally been lied to. We have an opportunity in the form of a presidential campaign to educate people about socialism and communism while it is still a dirty word. We better do this now. The polling data shows socialism is not widespread-believed enough to propel a candidate in a two-candidate race to the presidency.

RUSH: Folks, I just want to tell you: There is no recession. Do you realize the United States is the only place for people to invest money in the world, particularly among our allies? They are suffering negative interest rates because of the blockheaded stupidity of these European socialists and it's causing havoc in the bond markets. There is no recession. But I'm telling you this: The financial people in this country are all leftist. You haven't seen anything yet in their efforts to destroy Trump.